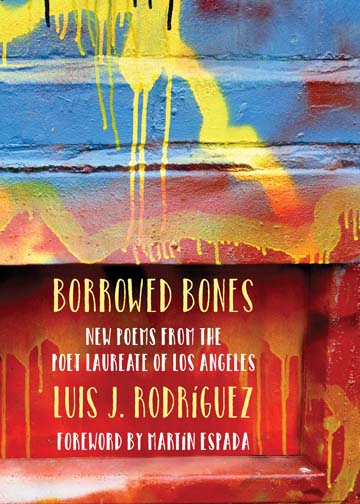 Give me NASCAR, lowriders, Hip Hop, the Blues.
Give me Crooklyn, cowboys, cool jazz, cholos.
Give me libraries, gardens of the muse.
Give me songs over sidewalks, mad solos.
Big America improperly sized.
Give me your true value, realized.

This chapbook collection offers new poems from the prolific career of a community leader, activist, and healer. Luis J. Rodríguez’s work asks profound questions of us as readers and fellow humans, such as, “If society cooperates, can we nurture the full / and healthy development of everyone?” In his introductory remarks, Martín Espada describes the poet as a man engaged in people and places: “Luis Rodríguez is a poet of many tongues, befitting a city of many tongues. He speaks English, Spanish, ‘Hip Hop,’ ‘the Blues,’ and ‘cool jazz.’ He speaks in ‘mad solos.’ He speaks in ‘People’s Sonnets.’ He speaks in the language of protest. He speaks in the language of praise.”

About the Author
LUIS J. RODRÍGUEZ has published fifteen books of poetry, children’s literature, fiction, and nonfiction. He is best known for his 1993 memoir of gang life, Always Running: La Vida Loca: Gang Days in L.A. His awards include a Finalist for the 2011 National Book Critics Circle Award, a Lila Wallace Readers Digest Writers Award, a PEN Josephine Miles Literary Award, a Paterson Poetry Prize, a Carl Sandburg Literary Award, and fellowships from the Sundance Institute, the Lannan Foundation, the City of Los Angeles, the City of Chicago, the California Arts Council, and the Illinois Arts Council. Los Angeles Mayor Eric Garcetti in 2014 chose Luis J. Rodríguez as Poet Laureate of the city. Rodríguez is also Scholar in Residence at California State University, Northridge.

MARTÍN ESPADA was born in Brooklyn in 1957. Called the Latino poet of his generation, he has published more than fifteen books as a poet, editor, essayist, and translator. Espada is currently a professor in the Department of English at the University of Massachusetts–Amherst.

Links to the young poets published here at TribeLA magazine: