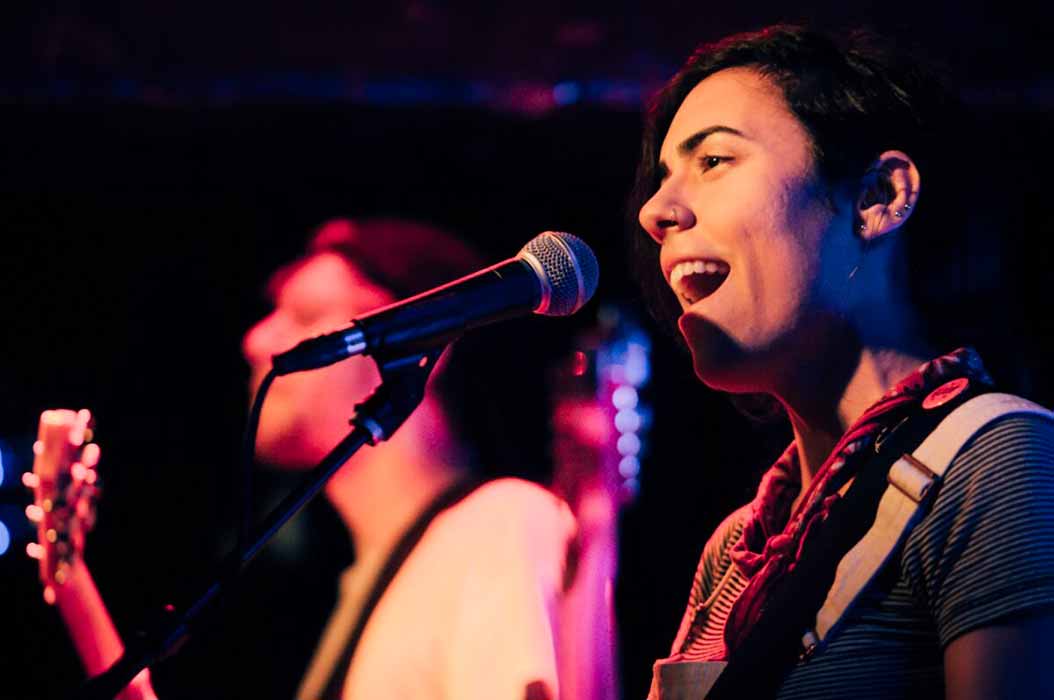 Sarah Tudzin sings and plays guitar in a “tenderpunk” band. If this sounds to you like a group of burnout teenagers who frequent The Smell–the type of venue where you have to know someone to play–in Downtown Los Angeles, you’d be wrong. Her style is more “A lil salty, a lil sweet, always intentional, and always considerate. Loud n tender.”

The clue in to Tudzin’s punk rock pedigree lies in the title of her band: Illuminati Hotties. A play on the alleged group of pop culture’s most elite world leaders including Kanye, the Kardashians, and Taylor Swift, the name evokes a sentiment that is “unequivocally anti-establishment & pro-individuality” which is how Tudzin describes punk culture. She doesn’t need power and she doesn’t need clout.

Punk is no longer Sid Vicious and Nancy Spungen running amuck in the Hotel Chelsea until Nancy was found slumped under a bathroom sink in lingerie and Sid overdosed. It’s no longer all illicit substances, blood, and frying one’s vocal chords. It can be, but Tudzin argues it doesn’t have to be. “In today’s world, we can adapt and modernize the punk/DIY-ethos to stand for a greater cultural collective of folks who have something to say about what fires them up or bums them out or makes them yell or cry or laugh or slam on a guitar, with respect to the folks around them and for the greater good of dismantling oppressive forces.”

In short, it’s very punk rock to care and be cared for, now more than ever.

Tudzin’s brand of punk is something she specifically titles “tenderpunk,” informed by the “sadgrrl music I had been writing pre-hotties, and the gnarly noise that gets me stoked about making records and pushing buttons.”

In conjunction with “sadgrrl” and “gnarly noise” sounds, Tudzin’s lyrics often entail commentary on her age. She’s 27 now, but listen to her record (2018’s Kiss Yr Frenemies) and you’ll hear her mention ages that were, for her, somewhat formative or painful. “Every year has been wildly different,” she says. “From ages 24 to 25 I definitely felt a lot of growing pains in a way that seemed more serious than any other years I’d made it through up to that point, for no particular reason other than I finally felt like a real person. The next steps of life were not as abundantly clear as they were when I was legally obligated to attend public school or parentally encouraged to finish college.” Now in her late twenties, she’s excited to see “how it will feel to continue playing songs that were very much informed by my early 20s.”.

Tudzin will be playing those songs on tour this summer as Illuminati Hotties hit the road to support rock heavyweights American Football. Touring with them is a hallmark for Tudzin as she explains that the band “wrote the modern emo gospel and bits of their writing styles have certainly, even subconsciously, leaked into my own art and DNA as a lil indie artist with feels and a guitar.”

As exciting as touring with personal heroes may be, Tudzin admits “after seeing so much of the country on tour, it always feels real special to return to this buck wild sprawl.” The “buck wild sprawl” she is referring to is Los Angeles. An Angeleno by birth, she feels an innate sense of belonging in the City of Angels. “I feel like this city is deeply woven into the fabric of my being. Without really thinking about it, it tumbles out of my personality and my art and it’s something for which I’ve always had infinite love/a touch of nostalgia. There is a magical energy (vitamin D) that draws so many dreamers to create and to plant their roots here. The surreal-ness that hangs in the haze has always been the perfect balance of tangible and mystical to me. There are so many flavors, people from all over the world, things to do at any hour on any day of the week.”

A love of Los Angeles is certainly ingrained in Tudzin. Just read how she waxes poetic about the city even when giving instructions on how to find its gems: “You have to explore; drive up through the forested mountains or down by the coast. Weave through downtown tunnels and climb steep, tilted stairwells in order to stumble upon breathtaking views or equally breathtaking Al Pastor.” (her favorite LA spot is Guisado’s)

Her mom–endearingly referred to as “Mama Tudzin”–lives in the Valley. As for Tudzin, she has “become deeply enamored with the eastside and all the little neighborhoods surrounding downtown.” She cites San Fernando Valley legend, Jenny Lewis, as a favorite musician and also names John Cage, Kendrick Lamar, and Elliott Smith, the latter of whom is not a born-and-raised Angeleno, but has left enough of a mark on the eastside to be considered a Los Angeles staple.

Before leaving her home base–the “buck wild sprawl” that is our beloved City of Angels–Sarah’s Los Angeles experience will reach a new milestone when Illuminati Hotties and American Football play the Regent on May 12.